Asia's Next Top Model Wiki
Register
Don't have an account?
Sign In
Advertisement
in: Models, Cycle 3, Indonesia,
and 3 more

Ayu Lestari Putri Gani is an Indonesian aspiring model, known for being the winner of the third cycle of Asia's Next Top Model, where she represented Indonesia and being the first contestants from Indonesia who entered the top three in the whole history of the show.

Gani was born in Solo in Central Java, Indonesia, before she moved to Yogyakarta. She studied at Sanata Dharma University majoring in English literature, and received a scholarship from Cincinnati, Ohio for one year because of her talent in music. After that, she finally moved back to Jakarta and is now studying fashion business at LaSalle College Jakarta.

Gani began her career a few years ago when she joined one of the most prestigious modelling competitions in Indonesia called "Wajah Femina", where she was awarded "The Most Favorite" title. After that, she walked in several fashion shows around Indonesia and became the icon of Jakarta Fashion Week 2012. She has also been featured in numerous magazine covers, spreads, and interviews like Surface Magazine, Femina Indonesia, Grazia, Nylon, HighEnd, and Harper's Bazaar Singapore as the winner of Asia's Next Top Model (cycle 3). She has also modeled for Zalora.

Gani was one of the fourteen contestants on the third cycle of Asia's Next Top Model. She was one of three contestants representing Indonesia, the others being Tahlia Raji and Rani Ramadhany. She received three best photo or first call-outs in weeks 2, 6 and 12 – the second highest number after Monika Sta. Maria with four. She won the competition against Sta. Maria and Aimee Bradshaw, winning a Subaru XV STI, a cover of Harper's Bazaar Singapore, a contract Storm Model Management in London and a campaign with TRESemmé. 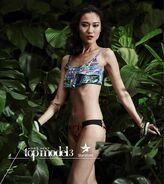 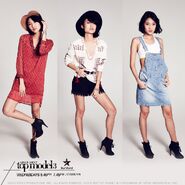