This is a list of challenges which have appeared on the television show Asia's Next Top Model.

Each episode usually begins with the contestants receiving training in an area concurrent with the week's theme. For example, contestants may get coached in runway walking, improvisational acting, and clothing to suit various occasions. A related challenge soon follows, such as a mock (or real) runway show or interview, where one of the models is chosen as the winner. 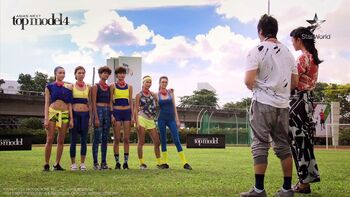 The winner of the challenge receives some prize, such as a contract, a night out, or an advantage at the next photo shoot. The winning contestant is sometimes permitted to share their reward with other contestants of their choosing and on some occasions, may gain immunity from elimination at the next judging. Losing the challenge can result in some minor punishment, like losing frames for the next photo shoot. It can also end in the immediate elimination of the contestant.

Each episode, which covers the events of roughly one week of real time, is usually associated with a theme in the world of modeling, such as dealing with the press in interviews, selling a commercial product, appearing in a runway show, or visiting prospective employers in "go sees".

Cycle 4 introduced a new scoring system in which the contestants would receive scores for their performances at challenges.