This is a list of contestants who have appeared on the television show Asia's Next Top Model. Contestants compete against each other to become the next top Asian supermodel. They are judged by a panel of experts, including former model and TV personality Georgina Wilson and her fellow judges, to win a modeling contract with top modeling agency Storm Model Management, a 3 month all expenses paid working trip to London, the opportunity to appear on the cover of Harper's Bazaar Singapore, 100,000 Singaporean Dollars, the chance to become the new face of Canon IXUS' 2013 campaign, and a brand new Subaru XV. The series first aired on November 25, 2012. 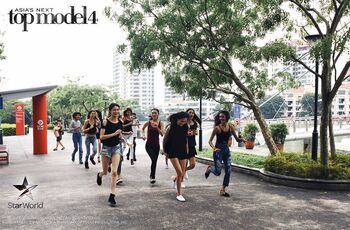 Contestants from all over the world of Asian descent and currently residing in a country of Asia are permitted to apply to be on the show through video-auditioning, and then the chosen are invited to attend casting calls in Singapore. Thuy Trang Nguyen from Cycle 1 was recruited after appearing as a national franchise contestant of Vietnam's Next Top Model, Cycle 2. Rachel Erasmus was scouted by fashion designer Daniel Boey through a phone call.

(Ages stated are at time of contest)