Lorretta "Lori" Chow is a Canadian-Hong Kongese fashion model, actress and singer active in the Hong Kong entertainment industry. She was the second runner-up at the 2007 Miss Hong Kong Pageant and a former managed TVB artist. She released her debut single, "Discreet" (不失禮) in August 2013.

In 2015, she was picked to be a contestant on the third cycle of Asia's Next Top Model. She was eliminated on the fourth episode together with Celine Dương of Vietnam. 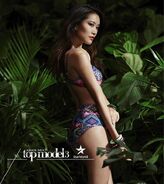