Asia's Next Top Model Wiki
Register
Don't have an account?
Sign In
Advertisement
in: Models, Cycle 3, Philippines,
and 3 more

Marlena Monika Ng Santa Maria is a volleyball player in De La Salle University she was part in the team called Lady Spikers who won championship many times and she is a Filipino-Malaysian aspiring model, known for being a contestant in the third cycle of Asia's Next Top Model, where she represented the Philippines. Sta. Maria lost the competition to 23 year-old Indonesian model Ayu Gani thus, becoming the runner-up of the competition.

Santa Maria was born to a Filipino mother and a Malaysian father. She was raised in the Philippines since two years old. As a child, she never aspired to be a model because she was always shy at school and never imagined herself as a model. She graduated with a Psychology degree in De La Salle University. She also became a volleyball player in La Salle where she was part of the team Lady Spikers.

Before she appeared in the third cycle of the Asia's Next Top Model, Santa Maria before joining the third season of Asia's Next Top Model, she already featured in various magazines such as Metro, Mega, and Circuit, and won Century Superbod in 2012. She first auditioned in the second cycle but was rejected. She finally got in when she auditioned again for the third cycle of the competition thus, becoming one of the 14 contestants. She dominated the season by getting four best photos — the most among all the contestants and winning episode challenges, Santa Maria caught the attention of everyone involved in the show right from the start. But she only ended up being a runner-up to Ayu Gani from Indonesia. Santa Maria is the third runner-up in a row representing the Philippines after Stephanie Retuya and Jodilly Pendre. After the show she appeared in various TV guestings in GMA Network such as Unang Hirit and The Ryzza Mae Show. She's currently the face of Close Up and endorser for Oppo. She is currrently signed to Andrews Models Malaysia.

In Cycle 6, Monika returned as one of alumni mentors, advising Dana, Iko, Jesslyn, and Rubini. 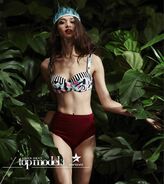 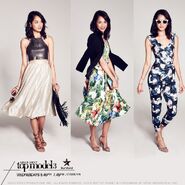